☆This time I personally need your help....☆
This was a tough decision to decide on. I generally stay behind the scenes keeping this site chugging along. Joe, is the one that gives out the amazing wealth of knowledge he has. I've put an amazing amount of time into the bringing together this website and not to mention have footed the bills a few times. I've kept us hacker free for a damn long time. I never ask much of you guy/gals. Only if we get in crunch time and the site needs a little help. Ive never asked for the ridiculous thousands I have seen another site ask for.. ridiculous is the perfect word. I even removed ads for those that log in, severely cutting revenue. Sites been about helping people, not making money. I feel bad actually doing this.. but I need help. I have gastroparesis brought on from diabetes(20+ years). I've been struggling with this nightmare for over 3 years. Finally diagnosed beginning this year. Look it up. Look up worst cases... that's me. Ive lost 60 lbs since January. 28 days ago the company I've worked for for many years found their dirty lil way to fire me. I was approved for up to 3 days off a week for fmla.. that really pissed them off. So illegally fired, savings drained from medical bills, bad diabetic now with no insurance. I'm in deep shit. That is politely saying it unfortunately. If any of you guys cant help please at least keep me in your thoughts. If this was wrong, me asking for help, my apologies. I'm declining in health fast, and unemployment hasn't came through yet and that in itself is a nightmare. Anyone who can, please donate to the website. This time it goes to help me. Thank you everyone. Again, my apologies for asking. I honestly don't know what to do or where to turn.
Rob *This message can be dismissed by hovering over the upper right corner of it and X should appear. click that.*
UPDATE: THERE HAS ALREADY BEEN A FEW OF YOU DONATING. THANK YOU SO MUCH, I'M LITERALLY IN TEARS AS I TYPE THIS. EVERY PENNY COUNTS. THANK YOU SO MUCH FOR BEING THE HEROES RIGHT NOW.

The area for the Yamaha Virago DIY enthusiast.

Good day folks. I recently purchased an 81 monoshock with the plan to convert it into a standard-ish 1100 v-twin. I prefer the early Viragos for the fairly neutral ergonomics, but I would like the full strength 1000/1100 motor for the better torque characteristics. My intention is to source a cheap 1100 and do the motor, fork and wheels swap. I am fully aware of the wheel offset issue and it doesn't bother me, but my most pressing question at the moment is if the front end will swap over, i.e., is the steering stem compatible with the neck, or will it need to be pressed out and replaced with the 750 stem. I know the donor tci will need to be used. The current 750 was laid up since 1992, so while is has only 14,000km indicated, there are significant corrosion issues. The starter is crunchy but fixable, but I don't want to invest a whole lot of time into getting it running if I'm going to swap it out anyway. I didn't realize it was going to be so hard to source a set of pipes for an early 750. I have headpipies and collector, but they are not in the best shape. Is the Gen II system usable on the 81? That would solve a lot of problems. I am currently into this bike for a princely $100CAD, and I would like to come in below $2000 all-in. That's a goal, not a fixed in stone restriction. If anyone has done this swap before, please chime in with your knowledge, it would be greatly appreciated. I'm not looking to made a show winning cafe out of this, I am just trying to maximize the bike's potential will all stock Virago parts. There is currently and abandoned project 1100 in the classifieds for $800. That would set me up beautifully, but the motor can't be started due to the wiring being a shambles on the donor. A bit of a risk!

As an aside, do you think it would be worth the trouble swapping the 750 heads onto the 1100 for the compression bump?

Welcome to the forum.

Unfortunately, my ramblings of my own build is left in the darkness of the Internet after viragotechforum.com stopped working, but this is what I remember from my own similar project. I have a 1982 XV750 chassis and an 1100 engine. I also have an XT600Z rear shock, a Seca 18in rear wheel and the stock front end.

Let us begin with the engine. You need to use the cylinder head-to-frame brackets from your 750 on the 1100 engine. I slackened off all bolts on the head evenly before removing the brackets, then tightened everything down according to the manual. I then let the engine sit over night, before re-torquing the head. Apparently, that is enough to stretch the bolts and let all things settle, no need to heat cycle. It worked for me, at least. Do not turn the engine at all when bolts are slack, since the disturbance can cause the head gasket to leak later.

Another issue will be some of the engine studs holding the footpeg brackets on the 1100 being in the wrong place - basically, you need to swap so that you retain the 750 studs on the 1100 engine.

But not so quick! If you want to retain the stock 750 footpegs and -brackets, you need to use the RHS engine/clutch cover. And on the 1100 that also means replacing the clutch with that off your 750. I will suggest stiffer EBC clutch springs. Why? Because the 1100 clutch is too wide to fit inside the old style cover.

Now to the electrics. If you are going to use everything off the 1100, you will have an easier task than me. I retained the stock instruments, headlight and fuse box, but used the switch gear and everything else electrical from the 1100. Things will fit poorly! By that I mean that the various boxes live in totally different places on the two frames, making some wires too long, others too short. But at least you do not have to do any mods of the wiring by keeping everything off the 1100.

Fitting the coils and ignition advancer gave me a serious headache. My solution is sturdy, but not elegant. Fortunately, it is hidden by the Gen I coil covers in operation. Other than the vacuum advancer, that is. 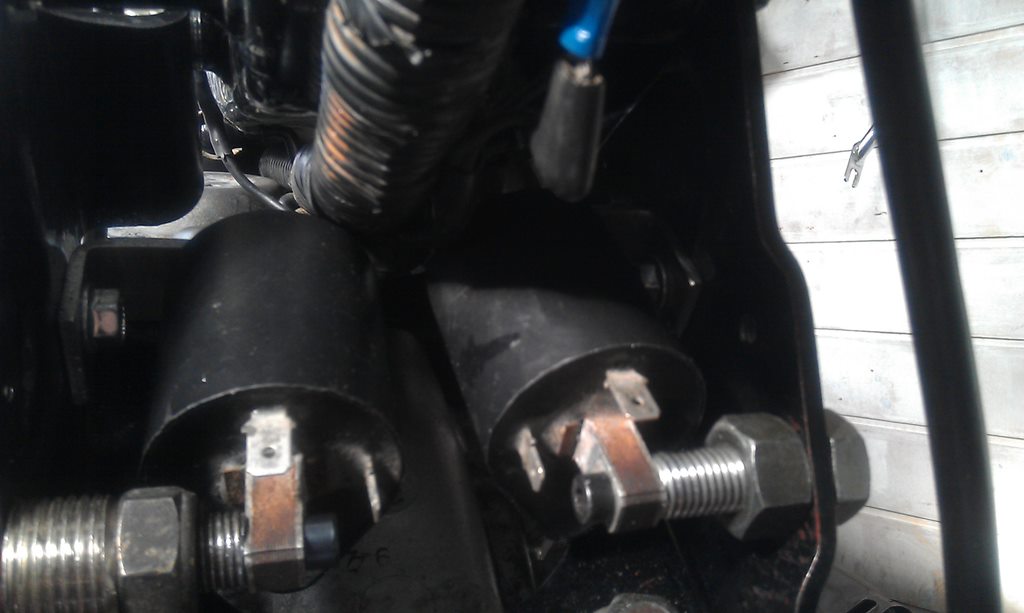 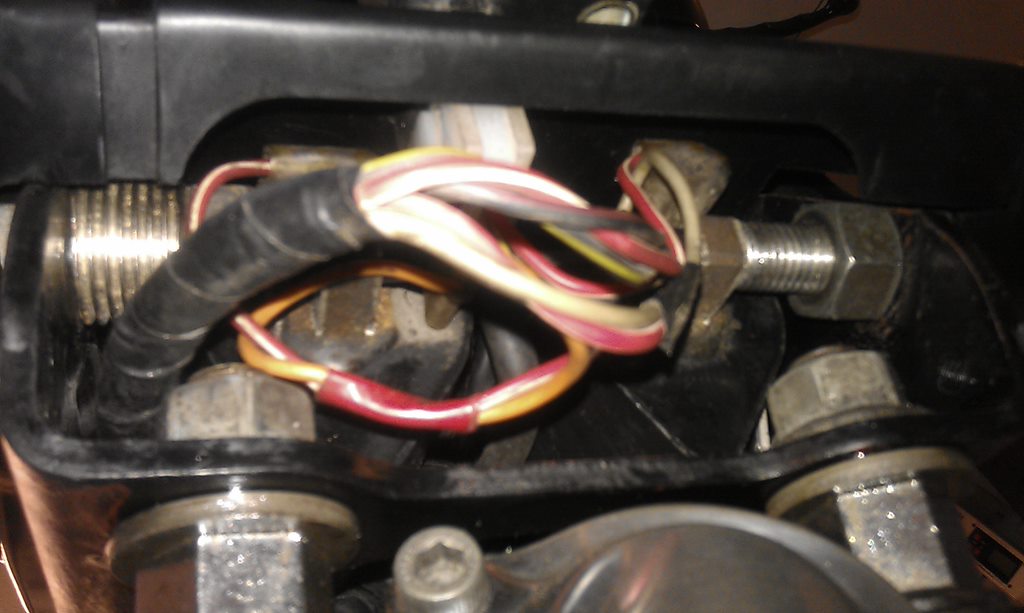 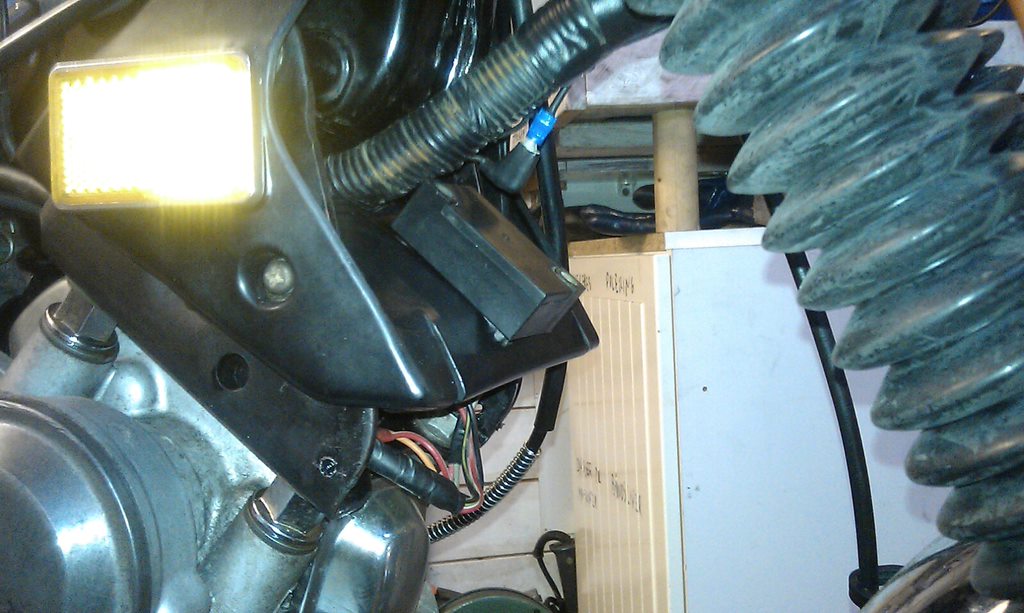 As to the steering, the bearings differ and I believe the stem length also, but I am not sure. Not sure whether the easiest solution will be to swap stems or bearings - expect the top triple clamp center hole diameter to be wrong for the old stem.

I kept the stock front end, despite its spindlier stanchions and silly brake system because I wanted an 18in rear wheel to match the front. I am no fan of 16in rear wheels, and definitely not 15in. Especially since I planned on using knobby tires, which cannot be found in 15in.

The exhaust will not swap between the generations as far as I know, but I think MAC makes a 2-1 that will fit both. The two generations use the same front header pipe, but rear pipe differ, as do the room taken by the "boom boxes" in the frame.

Hopefully, I have managed to cover the most important bits.
The journey of a thousand miles begins with a motorcycle.
Top

Forgot to comment on the cylinder heads. Yes, the 750 heads will increase compression and give more power, especially in the lower 2/3 of the rev range. The best heads are those on the 700, due to a better design.
The journey of a thousand miles begins with a motorcycle.
Top

Thank you for your insights Faffi. It's too bad about the fork, I thought it would be an easy swap. Oh well. The rest seems manageable enough. More power is always better, but maybe it's more than I want to take on if I'm honest with myself I'm really looking for more torque than my XS650 has on tap, so a stock 1100 is probably just fine as is. There is a 750 Seca on offer at the moment for $350 which would serve to fill all my suspension wishes. I just don't think 4 bikes in my garage would be too convenient over the winter.
Top

The XJ750 Seca front end should AFAIK dip right into the Gen 1 triple three. Its fork legs are shorter, though, and you must either do quite a bit of work or retain the stock Seca brakes and wheel. If you wanted to go that route

Anyway, a 750 Seca will outperform any Virago in almost every way save top gear roll-on regarding engine performance, and also the chassis is better. I used to have one back in 1983. However, the buzz from inline fours annoy me these days, I much prefer the mellowness from twins. I am also fortunate enough that my 1100 runs very strong, and can just about keep up with my son's mildly tuned FZ-07 in all-out acceleration and top gear roll-ons.
The journey of a thousand miles begins with a motorcycle.
Top

Yes, the Seca would be functionally superior in most every way, but all I would want from it would be the wheels and front end for the twin discs. I can't justify the nuisance factor of having to dispose of the rest of the bike however.

I think for now I will concentrate on getting the stock 750 up to snuff and see where it all falls out. On a side note, a clean XV920R has come up for sale for $2000 locally. It never rains but it pours.

I am hesitant to pay for a motor I can't hear running. I was burnt doing that a few years ago.
Top

This is after a lot of sanding on a plate, head would need a proper shaving to be good again

Well, after a slight delay caused by getting the paperwork sorted, this project is back on. I managed to secure a "murdered-out" 1100 bobber not 5 mins from here. $500 changed hands and the bike was mine along with a carb rebuild kit. The seller warned the carbs were probable beyond repair however, as they were seized solid. I took a look at the green float bowls and figured I had seen worse. The kits were quite comprehensive, and after a night soaking in Pine Sol, they cleaned up nicely. I reinstalled them and was rewarded with a quick start and perfect response to throttle inputs. I have recovered the gen 1 seat, and both motors are on my garage floor. I was hoping to used the flatter right side engine case so as to retain the stock pegs. I know this will require re-using the 750 clutch. Do you think the smaller clutch can handle the extra torque?
Top
Post Reply
8 posts • Page 1 of 1