Tired of seeing ads? Register now! Registered members NO longer have to see any advertising on the forum side of the website. Enjoy! --- Rob

Not sure what to spend government check on??
Donate to ViragoHelp!!!

Have a question about fixing something on a Yamaha Virago XV1100? Post it here!
Post Reply
19 posts

ViragoJoe wrote: ↑
Sat Jun 29, 2019 10:49 pm
Previous owner must have changed the retaining bolts for the carburetors from hex to Allen bolts.

"The mechanic swore to me that he adjusted the valve clearance to the factory standard, but I no longer believe in him. Is it possible for the virago to have these types of stumbles because of poor regulation of valves?"

Yes, tight valves can cause misfires. Loose valves are less of a problem, however, too loose can cause damage between the valve stem and the tappet adjuster. Not to forget to mention the engine will be much noisier.

Check the clearances, it won't take that long to do.

Thank you! I'll do that.
Right now i'm fixing the starting motor (mine was terrible), so after that i'll check de valve clearance. Its kinda my only hope. I have no idea what is the problem, but I have this feel that it's something with the valves.

Thanks for the help!!

I confess that I am getting discouraged a bit of the bike, because here where I live anything for this bike is very expensive, or difficult to find, and this discourages a lot. Not to mention that it is my only means of transportation (I dont have a car or another bike). I think I was unlucky because my virago suffered a little at the hands of the former owner.
About the allen bolts, here where I live (Brazil) it's everywhere, allen bolts are really easy to find, in all specs.
Top

"Right now I'm fixing the starting motor (mine was terrible)"

Once we get that taken care of first. Then we'll work on correcting the other issues.
ViragoJoe

Once we get that taken care of first. Then we'll work on correcting the other issues.

Well, I was riding the bike even with the flaws and gaggins. However, since I got the bike, I noticed that her starting is a bit heavy. And sometimes, after walking a few miles and the engine gets a little warm, she has trouble turning on.
The feel is exactly the same as when the battery is low. However my battery is new. The oil light flashes while pressing start, it tries to turn on but can not. The starter motor gets really hot, then I have to wait a bit and then she start.
The heavy start I have noticed since always, but not starting is not common and happened just a few times (95% of the time its starts normal).

After opening the starting motor I realized that a piece of it had broken, and it was turning loosely, which caused uneven wear of the brushes.
I bought a new starting motor from a guy who also has virago and had some spare parts, and I'm waiting for the delivery to arrive. It's not a new one, but it seems to be in better condition than mine (believe it or not, a new one directly with yamaha costs the equivalent of SIX Brazilian minimum wages, in dollars would cost around 1500 dollars. It costs almost half of a virago 1100 here, almost the price of a 250 or 535) At the moment I'm cleaning the gears and taking a look at the stator conditions, to see if everything is ok.
Top

Eric,
Go easy on the starter button. Prolonged starting can do this:

I just wanted to put it out there since our intake manifold boot bolts are hard to get to and just a pain in the a#@, I'm switching bolts to an Allen head bolt. I just got back from Lowes and threaded it in and it works!! The size is M6-1.00 X 20. Each package contains two bolts and are about $2.75 a package. It's a #5 Allen head just like the rest of the bike.
You do not have the required permissions to view the files attached to this post.
"May the good news be yours!" - Les Nessman
Top

That is, if you want to change them to Hex Head screws. I did when my Reg/Rec died and I replaced it. Hexes are easier to torque tight than the Japanese J.I.S Phillip Heads. If you don't have J.I.S. screws drives makes removal and reassembly much harder.
ViragoJoe

Hello guys. I'm here to update about my problems.
1: The starter motor
2: the stumbling, failing at low rpm

1) One of the problems has already been solved (the starter motor was replaced by a used one, but in better condition, and I replaced the brushes with new ones, now the motor starts up quickly and doesn't heat up like before).

2) I think i found the problem with my virago.
This piece here is made of plastic I think, it is screwed into the carburetor body. The Main Jet (122 or 125) is attached to this cylinder, along with a washer and the emulsion tube (nozzle).
Warning: this picture is not mine, is from an youtube video. My carbs are in worse condition... 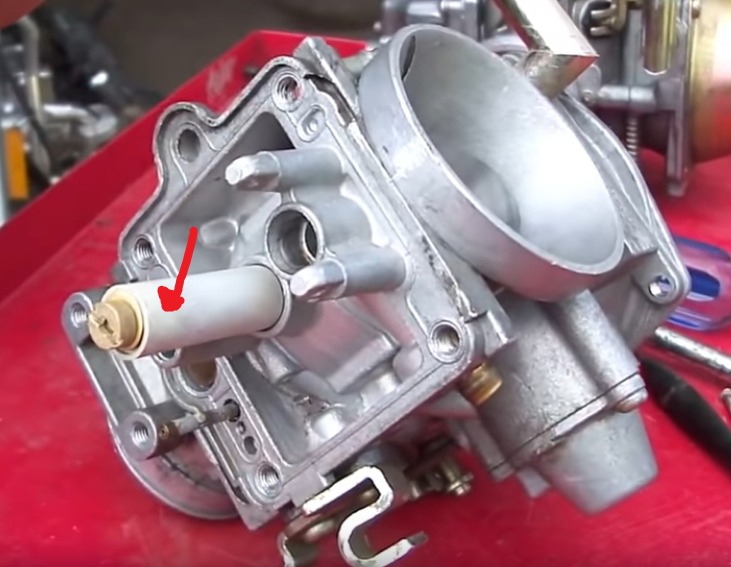 I found that my emulsion tube is not stuck in the correct position, and it is spinning loosely inside that plastic piece. This plastic piece has a mark that "holds" the emulsion tube in the right position, but not in my carb. One is completly fine, and another has this problem.
I also discovered that this plastic cylinder has a drill hole (almost where the red arrow in the picture is pointing), close to the main jet, probably made by the "mechanic" that messed with my bike months ago. He punctured so he could see the position of the emulsion tube, but I think this caused soo much damage that right now I can not ride my bike without this problems (stumbling, failing, popping).

In the meantime I discovered that a virago 750 owner had the same problem as mine, exactly the same, his carburetor plastic part was cracked, and his bike had the same symptoms as mine.
There are many similarities between my case and his, that is probably the cause of my problem.

My situation is even more complicated because this piece of plastic is not sold anywhere, not even by Mikuni. And by the state of mine I doubt I can make a satisfactory repair.
Either I give up my carburetor and do a monocarb (something that I did not want to do), or pay a fortune to buy an old and used carburetor here where I live (they cost an average full minimum wage here in Brazil, and are not easy at all to find).

If anyone had a similar experience, I would love to hear your history with this plastic piece.
Top

Just updating:
I changed the carbs, and the problem its gone.
The topic can be closed now, thank you.
Top

-95 Xv1100-
I have been dealing with the exact same problem for years. I can confirm the exact same issue and symptoms. Glad someone finally has posted about it because I thought I was on my own.

However, there is a twist.

When I first discovered this plastic stripping, I noticed that the emulsion tube also sat loose in the top end of the plastic holder (opposite the main jet) due to stripped plastic. I remedied this by crudely shaving a gas-proof o-ring down so that it would fit just under the first lip of the emulsion tube and create a tighter seal when pressed in.

I had the carbs apart to repair a slipped diaphragm at this time, so when I put it back together and she ripped, I accredited it all to the diaphragm.

She ran great for a time, and then started losing top-speed and running boggy again. The diaphragm had slipped again. I fixed it and then after a while, the same symptoms. This time no slipped diaphragm. I worked on plugs, fuel system, pump, valves, filters. All trying to figure out why she just kept running more and more poorly over time. No Results. I was thrown off because it was not a dramatic decline. She would start maxing out at 85, then 80, then 70, etc. all over many months and a few road trips.

However, a few months ago it started getting worse and worse quickly. Running on one-cylinder, cutting out, fuel starvation. Eventually becoming un-rideable. All my other fixes have changed nothing. The only constant has been that one loose emulsion tube and its makeshift seal that slowly has been falling apart.

I am trying now to fix it with a better fitting o-ring at the top of the emulsion tube and JB Weld filling the divot at the bottom where that plastic flange used to lock in (to create a better seal). I will Post Results...

If all this is true however, it means that just the crappy o-ring seal I made way-back-when was enough to cause my bike to run great for months before losing integrity. The loose fitting/rotation at the bottom may be less important since nothing has worn or changed on that end, and their is also a washer that seals that end.

Another clue is that after running very poorly then being put away for 3 months over winter (not fixed), she started up and ran great for a few days. Then started to decline again. Perhaps old fuel solidified the seal for a while before being worn away by fresh gas?

Anyways, I will keep trying desperately to make the emulsion tube work right as I love my bike dearly, and carbs are running for $400 and up!

Unless anyone can find me a decently priced single MIKUNI CARB